Being able to write your own command-line tools is a great skill to have: automate all the things!

Unfortunately, writing CLI tools is still most often done with Bash. My strong opinion - weakly held - is that there are only two good kinds of Bash scripts:

Fortunately, retiring Bash is pretty simple: you just have to use your favorite programming language instead!

I've played around with Kotlin Multiplatform and not only built a cool CLI tool with it, but I've packaged it as a template project that you can leverage to get started faster!

git-standup is a smart little tool for people like me who often panic before the stand-up. What the hell did I do yesterday? That command refreshes my mind by browsing all git repositories and printing the commits that I made yesterday. Try it out, it may well become part of your workflow.

./gradlew install will install the tool as a native executable.

There are two more options available:

By choosing a modern programming language like Kotlin instead, we get to have

That may sound obvious, yet people still write their CLI tools in Bash, so it's worth repeating.

The three platforms have different characteristics, and by making your code available on all platforms, you can decide which one works better for you:

What is it like to write Kotlin Multiplatform code?

It feels like regular Kotlin once you have the abstractions you need in place, and all you need is to modify commonMain.

It gets interesting when you have to connect to platform-specific APIs with the expect/actual mechanism.

For example, I needed to check if a file exists:

Implementing this on the JVM is straightforward

But how to implement this with Kotlin Native?

Since Kotlin Native gives us access to the underlying C APIs, the question is: how would they do that in C?

Let's google "how to check a file is readable C".

The first answer is about the access system call. 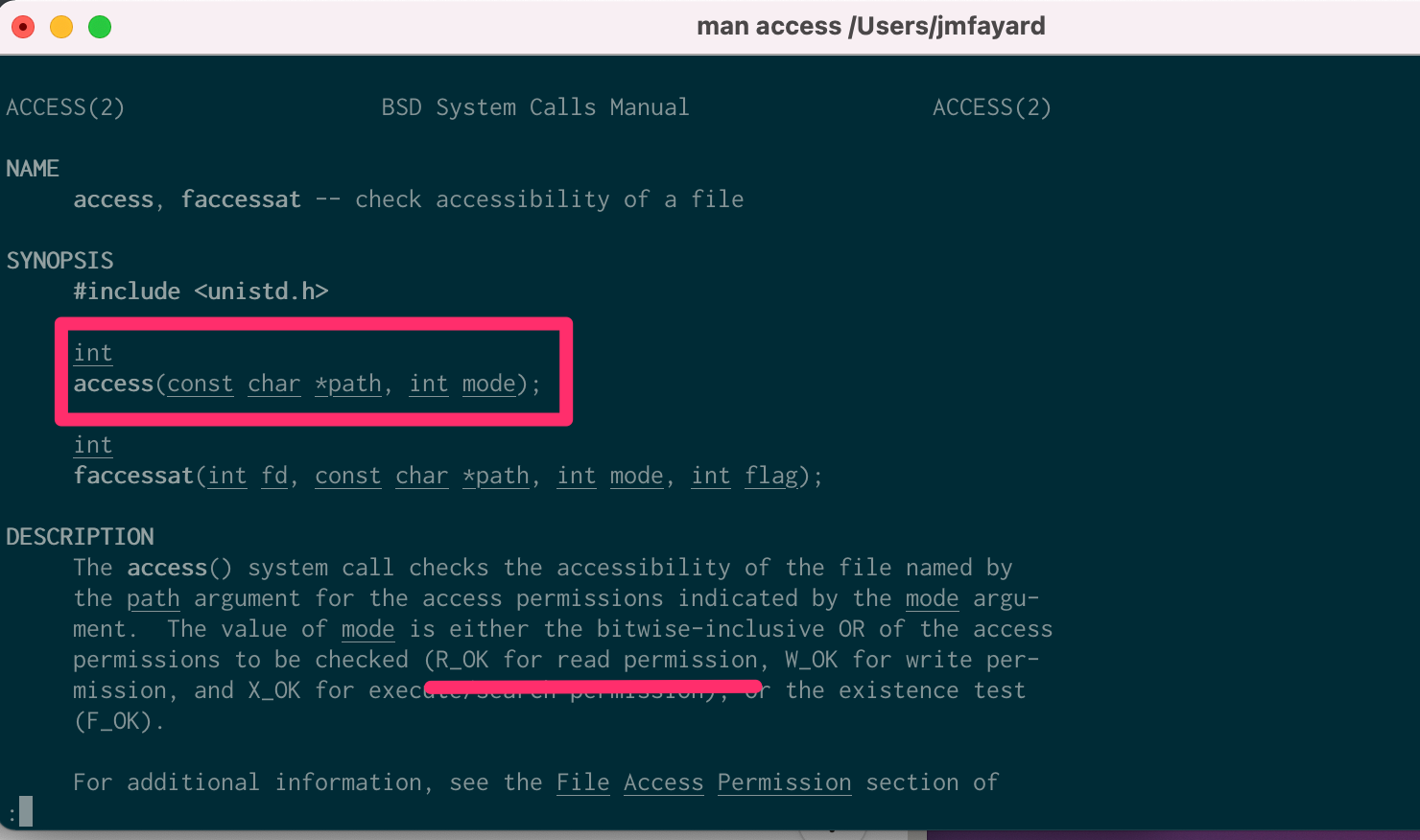 Which leads us directly to this implementation:

Interesting, strange feeling that we are writing C in Kotlin.

It works, but wait, there is a better solution!

Use an existing Kotlin Multiplatform library

I discovered later that okio has already implemented the multiplatform primitives I needed to work with files.

I was glad I could delete my platform-specific code:

Which multiplatform libraries should I be aware of?

The most common use cases are covered with Kotlin Multiplatform libraries: parsing arguments, JSON, databases, IO, DI, coroutines and testing.

I especially liked CliKt for arguments parsing. It has this killer feature that it can generate automatically not only the help message, but also shell completions for Bash, Zsh, and Fish.

The drawback: it takes time to set everything up

Building this project was a lot of fun, and I learned a lot, but it also took lots of time.

What should I do next time if I don't have so much time available?

Go back to Bash?

I really didn't want to go back to Bash.

This is when I decided to go another route, and transform my experiment in a starter project that I, and everyone, could re-use.

Click Use this template and you get a head start for writing your own CLI tool.

Find them with Edit > File > Find in Files 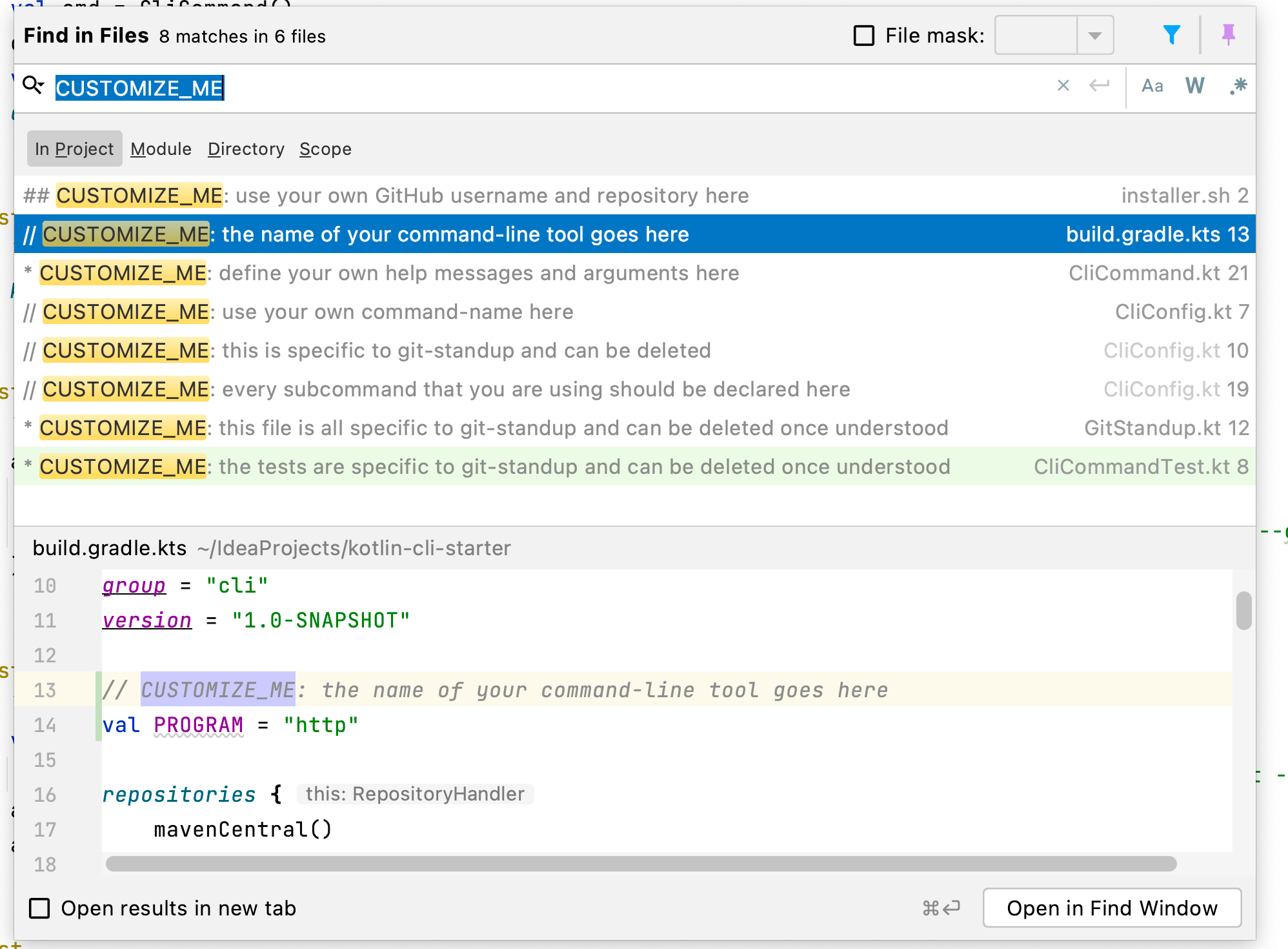 Automate your workflow by using command-line tools. But think twice before using Bash like in the previous century. Kotlin and other modern programming language could well be a far superior solution.

Using Kotlin Multiplatform gives you the strength of each platform, like a wealth of libraries for the JVM, a fast startup for native executables and a package manager (npm) for Node.js.

It is not strictly necessary, but if you want to learn Kotlin Multiplatform, this is a great point to start.

It could take a while to set up from scratch, though.

This is why I transformed my project to a starter project / GitHub template that you can reuse.

If you build something with the kotlin-cli-starter, I would be glad if you let me know!